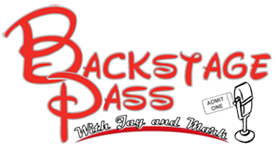 What is Backstage Pass?

Backstage Pass is an inside look at the magic of the Disney theme parks, media, history and more. We take you behind the magic and inside Disney history, pulling back the curtains to let you see the Disney magic and history up close. With an eclectic mix of topics, humor and tons of information and details, we want to keep you learning and smiling.

Hover mouse over each hyperlink for a description of the episode.
(iPad / iPhone / iPod Touch users - touch title (hyperlink) once to view description and then again to download / listen)

My love for Disney began WELL before my first actual memories as a child. My mother took a trip to Disney when she was pregnant with me during her 8th or 9th month of pregnancy and she swears that I heard the music from "It's a Small World".

As a child I can remember riding the train, that used to be in the Fort Wilderness campground area, for hours on end. This is where I gained my love for trains. Even at this early of an age, I was trying to figure out how the trains stayed on the tracks and why all the smoke and steam was needed.

I found the Inside the Magic podcast one day shortly after I bought my iPod. I listened for a few weeks and then contacted Ricky via e-mail. I wanted to see if he would let me do some voice work for the podcast, not for money, but simply for the passion I have for Disney and to get back into something I loved, voice talent work. After doing ITM show segment intro's as "Announcer Jay", Ricky and I discussed what I could do to contribute more to the show. I decided that since I was an electronics engineer, I could do a short technology segment called "Behind the magic". There were only three "Behind the Magic" segments (Audio Animatronics, Monorail technology, and Haunted Mansion Effects). Mark, contacted me after the second one and asked if I might be interested in working with him on a "History" segment. He said it might be fun to act as though we were having a conversation together on Main Street. His idea was for a Spectromagic parade technology / history segment. He would handle the history and I would talk about the technology behind the floats. This would be the first "Behind the Magic / Inside Disney History" segment and the start of something even bigger.

Backstage Pass was born the following week with our inaugural episode entitled The Power of Stun game show.

I'm the other half of Backstage Pass and I have had a love for Disney for as long as I can remember. I love to draw and paint and as a child, I was designing rides, buildings and attractions long before I ever got to go to a Disney park. (I have some Imagineering genes in me, although I am not quite sure where they came from...)

I was able to get to the parks quite a bit when I was single, and thankfully, my wife indulged my Disney obsession and we went many times as well. Over the years I have read and collected a lot of Disney material (especially on theme park design). When the kids came 5 years ago, our travels took a break, but my love for Disney did not. Looking around to fill my hunger for Disney information I stumbled upon some Disney podcast's. Inside the Magic podcast was my favorite and after listening for a while, I was struck by some of the similarities between the three-part Pirates of the Caribbean movies and the three-part Davy Crockett series. I put together an article and sent it to Ricky -- he read it on the show and the rest is history....literally. I kept submitting Inside Disney History segments and finally thought about recording them myself, and it just grew from there...

When I had heard that Jay was interested in doing more for the podcast and heard some of his initial segments, we thought it was a natural fit for us to work together -- and Backstage Pass was born. Little did he know what he was getting himself into -- from flying over the Magic Kingdom like Tinkerbell to being stranded on the side of a Main Street building, being thrown off a bridge in the Magic Kingdom, to being threatened by a mythical Russian dragon. And we have only just begun!

Learn how Backstage Pass got their start...